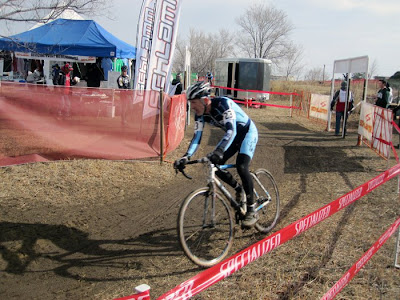 Two of the hardest racing days I've had.  Going from the warmth and easy times of the re-union of friendships to the cold fridged mud; unpredictably slippery, battling a demon that I could not create.

Day 2, USGP Fort Collins, CO.   Slotted into the grid as a somewhat relaxing number 23.  Close enough to the front to move up, but a bit away to keep me off the tip of the arrow head.    I've got my starting tact back, and when the whistle blew I moved up, dropped down two gears and on the brief macadam sat where I wanted to be on to the thin "good" narrow line when we hit the mud.  Some where just outside of the top dozen, 16th, or 15th.  The ground,  frozen, ruts, with a melting layer on top.  We sped on, a few shot across the lumps and tried to pass, risking early, and moving more backwards than the efforts were worth.   As we came into the longer corners I could count the men in front of me.  In the first climb, the ground was firm so I went over the red and just passed the few I could.  Leaving me just a bit out of the top ten.   I felt good.  I hit the berms, and jumped up to an outside line, just a hair short and the rear went 180, dropping my chain.   Hopping off, passed by the herd as I put the chain and back on.

Cross is lonely for me.  I go from the starting grid to pulling off the soiled kit in a brief moment.   I was lucky to hear the blur of my name shouted at me, encouraging me.   I race hard, and not with anger.  Somehow I find time to be just a bit chatty.  A few brief words every so often to my fellow racers, "nice corner",  "Hard, stay on my wheel" closing a gap to the a rider in front of us.

I've never regretted a race I've started, and I'm a field horse,workman like in my suffering.  I don't over think it, I go hard, maybe not fast, but hard.   I sprinted hard both days and picked up one place on the short bit of pavement to the line.  I suffered, bellowing in the thin air, black little dots dancing in my eyes. 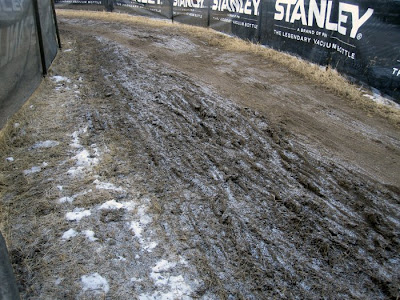 I've forgotten what its like to finish on the podium.

but still that moment, it captures me.

to my own Philadelphia bedroom tonight, next to my wife.